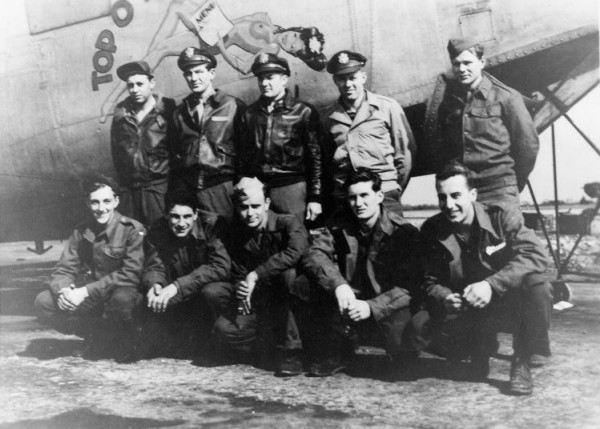 W.L. Jackson Crew - Flying at the End of Hostilities

Jackson’s first mission was on January 13, 1945 to the marshalling yards in Kaiserlautern, Germany, and their last was on April 16, 1945 when the 458th hit another marshalling yard in Landshut, Germany.  The crew flew a total of 27 missions. The crew was forced to abort on two of their missions, the first of which occurred on February 22, 1945 during assembly.  They lost the #2 supercharger at 8,000 feet and by the time they reached 12,000 feet over Beacon #5 they were only pulling 30” of manifold pressure. They brought their bombs back to base.  The second abort occurred on February 28th, but this time they were almost into enemy territory when a gas leak forced them to turn around.  They were given credit for this mission. [See account below]

At this stage of the war, all of the targets that the crew went to were in Germany.  The sole exception was the mission to Point de Grave on April 14, 1945.  It was on this raid, in an attempt to dislodge the remaining German forces in France that the 8th Air Force experimented with the first use of Napalm.  The crew flew a variety of 752nd Squadron aircraft on their missions, but one – B-24H25-DT 42-51110 7V M named TOP O' THE MARK seemed to be their favorite. They flew a total of 12 missions in this aircraft, including its 100th credited sortie on March 28th.

Seven days after their final mission the crew went on Rest Home leave.  Two days later the Eighth Air Force ceased bombing operations over Europe, and on May 7, 1945 the war in the ETO came to an end.  Many of the crews who had not completed a combat tour were assigned to ferry the group’s B-24 Liberators back to the U.S.  Jackson’s crew, along with several ground men, departed Horsham St. Faith in mid-June 1945, flying TOP O' THE MARK and made their way back to the States. 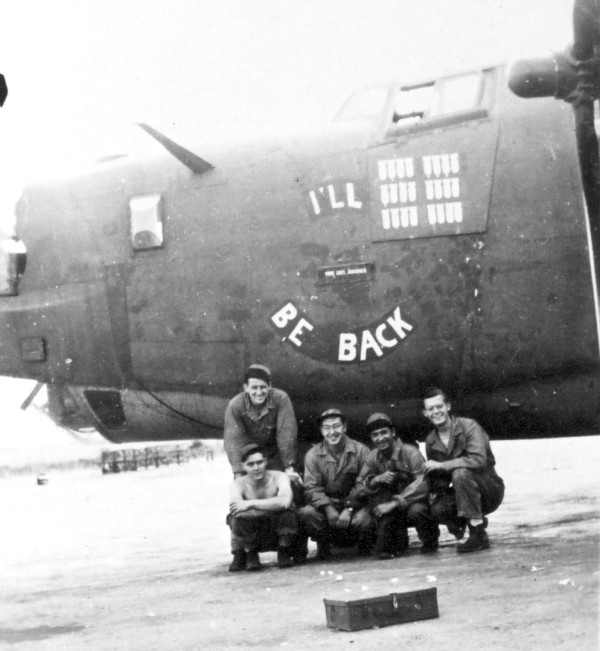 On February 28th, Jackson and crew were assigned to fly B-24H-10-CF 41-29305 7V N "HYPOCHONDRIAC" to Bielefeld, Germany.  This aircraft was an original 458th Liberator flown to England in January 1944.  At that time it was a brand new ship belonging to the 754th Squadron named "I'LL BE BACK" and was painted olvie drab.  At some point the plane was stripped of its OD paint and renamed.  On this particular mission the aircraft gave the crew a difficult time with leaking fuel tanks forcing them to abort. The crew did recieve credit for this mission.

We had a gas leak to develop soon after we began to transfer fuel to #3 tank.  We immediately changed to #4 tank, but the gas leak continued.  We quit transferring fuel thinking the tanks were too full, and that the leak would stop after using some of the fuel.  The Waist Gunner and Tail Gunner complained about gas fumes and after a while reported that they were getting worse.  We had started climbing by this time, so I thought that maybe this too would keep the gas leaking if the tanks were too full.  The gas leak continued throughout the climb.  I had had the crew chief crack the bomb bay doors about 6 or 8 inches when the gunners reported the fumes.  I called the Lincoln Red Leader and reported the trouble.  He called back and said act at my own discretion.  I called him back and said I would stay with the formation until we leveled off and see if it would stop.

When we leveled off we were almost in enemy territory.  I called my Waist Gunners and asked about the leak to see if it had stopped and he reported it wasnt doing any better.  About ten minutes later I asked him again and he said the gas was still coming out and the ship still had fumes in the Waist Section.  I called the Lincoln Red Leader and reported this, and asked permission to leave the formation, drop my bombs and return to base.  He called back and said to fly the same heading as the formation and out to the side, drop my bombs and return to base.  We pulled out of formation, to the right side and flew straight ahead for about three minutes.  We saw a town through a hole in the clouds which my Navigator identified as St. Goar.  We tried to drop our bombs on this town.  The left bomb bay doors would not open so we dropped them thru the doors.  We didnt see the bomb bursts because of the cloud coverage.  I dont know whether we hit the town or not.  We had no bombsight installed.  According to the Navigator we were approximately 15 miles southeast of Coblenz, flying a heading of about 110 degrees when we dropped our bombs.  After we dropped our bombs we turned to a heading of 270 degrees until we got back across the lines, and then we headed home.  The gas leak continued until we reduced our power settings to start our let down. 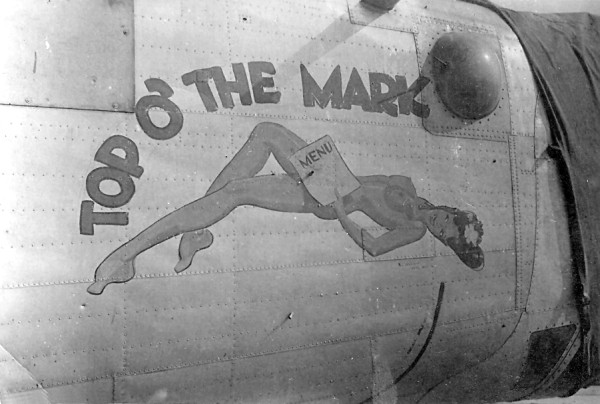 TOP O' THE MARK was assigned to the 458th in May 1944 and flew its first mission on May 13th and by the end of the war had racked up over 100 missions*.  The aircraft had quite an interesting career.  On June 29, 1944 752nd pilot 1Lt Kenneth M. Gorrell took the aircraft on its 20th mission to Aschersleben.  He returned minus two of his crew who had bailed out over Germany [See "Murder Unresolved" on the stories page].  The ship was also used as the backdrop for a crew picture by the 2Lt William A. Duke crew whose tenure with the 754th Squadron came to a tragic ending on February 22, 1945. Starting out in the 752nd, the aircraft carried the 7V squadron code and was assigned the call letter 'P'.  In August 1944 it was transferred to the 754th Squadron (Z5).  In October the aircraft went back to the 752nd and was assigned the call letter 'M'.

*Note on credited sorties:  Working with 65 year old records is sometimes difficult at the best of times.  Typos, errors and omissions, even the quality of these documents present many challenges to get things right.  While the mission list  (compiled from 458th formation plans and operational records) for this aircraft shows the 100th mission occurring on March 31, 1945, this does not appear to be accurate.  Photograph notations and the pilot's log book clearly shows the 100th mission to have taken place on March 28, 1945.  Over its 100+ mission career, the aircraft was forced to abort six times, only one of which was credited as a sortie.  Of the five remaining aborts, three are listed as "No Sortie" and the other two do not state whether mission credit was given or withheld.  This aircraft was also assigned as a "Spare" on seven occasions.  There is nothing in the records to say whether or not it was ever used in place of an aircraft that was scratched from flying due to mechanical difficulties on these dates. I have left the mission list "as is" for now.  If more detailed records are located in the future, this list will be updated. "Just Back from Germany" 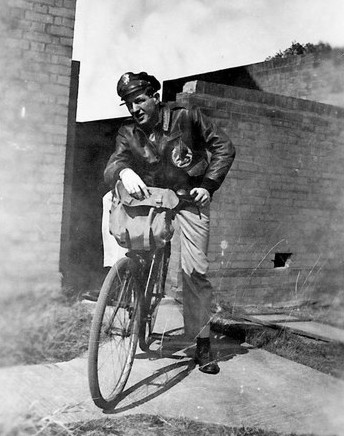 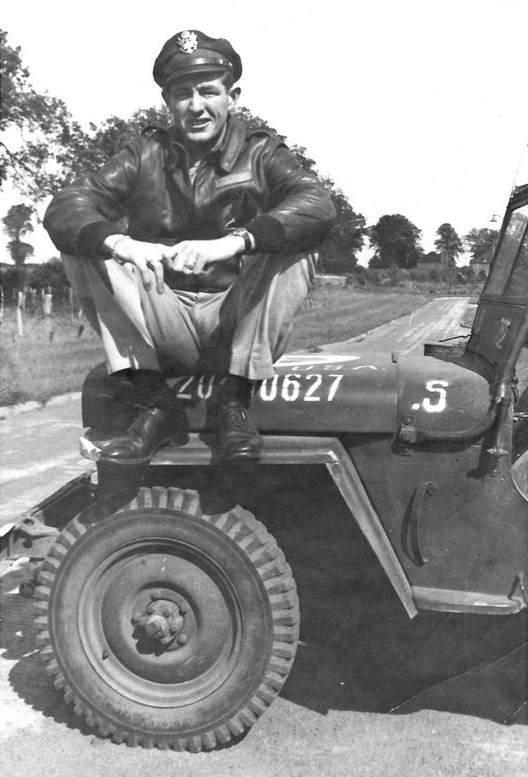 "On the Skeet Range" 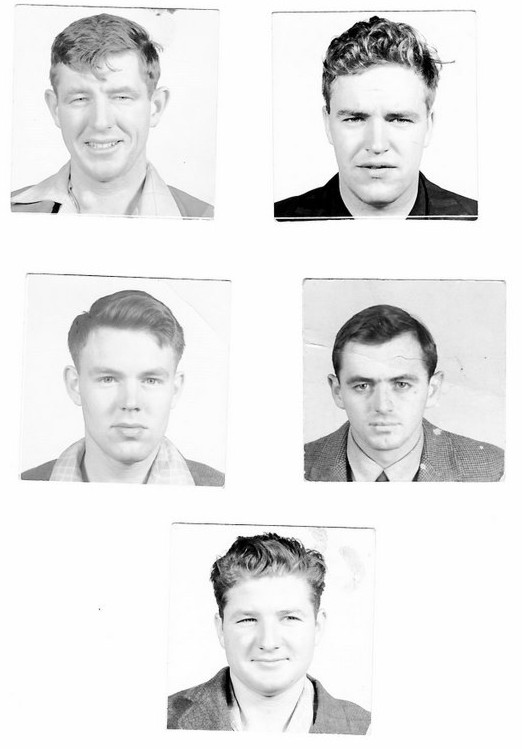 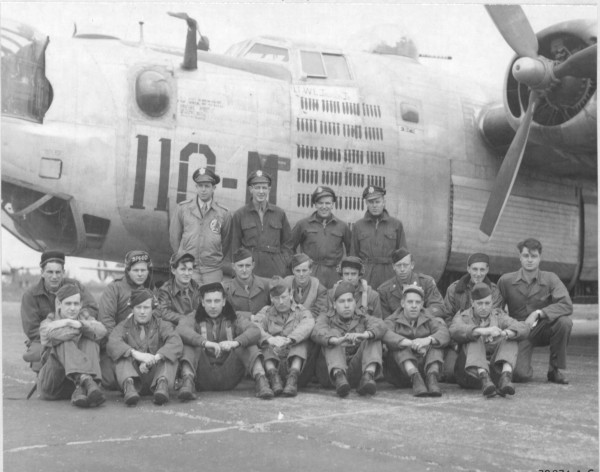 Members of the W.L. Jackson crew and ground men ready to depart Horsham for the U.S.