This is the story of a command pilot, Major Chuck Booth, who flew his last combat mission for the 458th Bomb Group 755th Squadron with Bill Beno’s lead crew. It happened 3 March 1945 on a bombing mission to a railroad bridge in Nienburg, Germany.  As the flight left Horsham St. Faith, everything was going along just fine. All squadron B-24s were in formation flying above 10,000 feet heading out over the North Sea for Germany. Unbeknownst to pilot Beno and the rest of the crew, Chuck was squirming in his seat with pains in his belly telling him that he had a serious call from mother nature. Soon he could stand the pain no longer.  He plugged his oxygen mask into a portable O2 Bottle and proceeded to go below deck to the bomb bay area. Flight Engineer Del Shaffer observed the proceedings from the flight deck, and it looked to him like Chuck took down his pants and was doing his business in a flak helmet, but Chuck did not have a flak helmet. He had pulled out a handkerchief, placed it over his right hand, and relieved himself. Then, by way of sign language, he motioned to Del to tell him how to open the bomb bay doors. Del showed him where the lever was that he had to push to open the doors.  Feeling very proud, Chuck finally opened the doors and moved closer to them to throw the contents in his right hand out the doors. Well!!! The turbulence of air in the bomb bay scattered the contents of the handkerchief like a blast of hot air from hell.  Chuck quickly closed the doors and pulled up his pants. Then, while trying to understand what happened, he embarrassingly surveyed the resulting mess. His flying suit was well splattered with dots and dashes of excrement that didn’t smell too good. He looked up to the flight deck and swore he saw Del scraping with his shoe some splattered contents off the deck down on him. (Of course, Del denied this.)  Chuck could see that the handkerchief ended up on the nose of one of the bombs in the bomb bay. (Later, Del told him that, with his oxygen mask opened to one side, Del could see that his exposed face was quite red.) Chuck reluctantly returned to his copilot seat feeling relieved and kind of smelly. (Wars don’t stop for soldiers to take care of their personal hygiene problems).

The mission continued as if nothing had happened. When the bomb run started at the IP (Initial Point), it was Del’s duty to open the bomb bay doors. He later reported that he noticed the handkerchief on one of the bombs, and also observed that the bombs were splattered with odd looking markings that were not there when he had removed the pins to arm the bombs.  (This has to be the only time that a command pilot in the 8th Air Force had personally marked the bombs in the bomb bay with his own DNA to send greetings to Hitler!). The primary target was nine-tenths cloud covered and, after two trips around and over the target, the bombardier couldn’t get a visual sighting, so Chuck ordered them to the secondary target---Bielefeld Railroad Viaduct. The bombs were dropped, the doors were closed, and the return to home base was uneventful after the 7 hour 19 minute flight.

At Horsham St. Faith, it was customary for Col. Isbell to greet the command pilots after each had successfully completed their last tour of duty mission. He would congratulate the command pilot with a hardy handshake, and have a photographer take a photo of him with the crew.  However, when command pilot Chuck Booth crawled out of the plane, he was in no condition to have his photo taken, or even to get close to Col. Isbell. He wanted to command a jeep, get to the barracks, clean up, and return to the critique before meeting the Colonel. As he started for the jeep, Col. Isbell pulled up in his staff car and intercepted him. Chuck saluted. Col. Isbell saluted back and stuck out his hand, but he immediately pulled it back and ordered Chuck to put his gloves on before shaking hands. Chuck and the Col. both had a good laugh. Pilot Beno also shook hands. Col. Isbell said “Go get cleaned up, I’ll hold up the mission critique meeting.” After he got himself cleaned up, he was seen at the mission critique downing a “few” shots of whiskey to relieve the tension and stress of the mission. Beno again shook his hand congratulating him on completing his “Last Mission.” Chuck said to Pilot Beno, “You know, if we had to bail out today, the Germans would have said, “We’re not shooting too many down lately, but we sure are scaring the s--- out of them”. 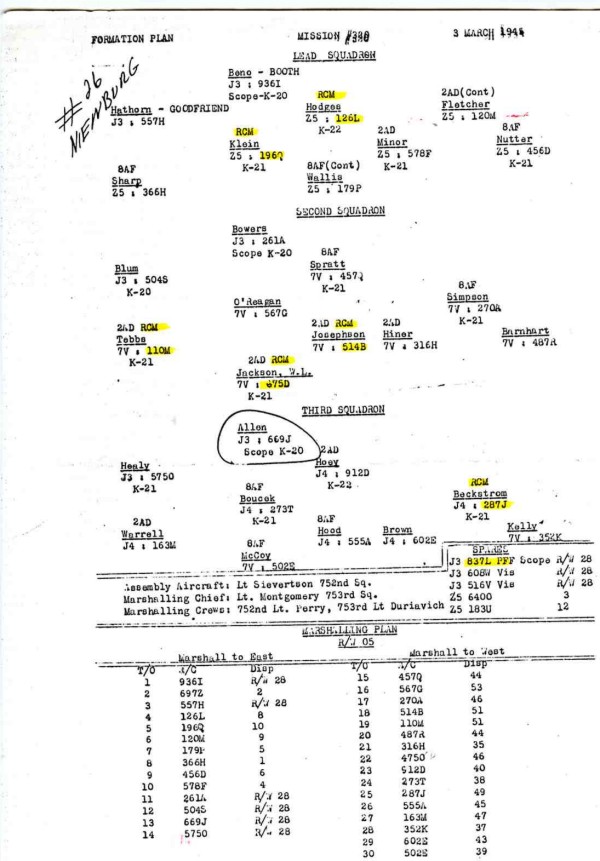